Let’s talk beer. There are 30 breweries in Charlotte, and over 20 breweries in the surrounding areas (Cornelius, Belmont, Concord, etc). But as you likely know, not all breweries are created equal. They range from the preferred hangout of millennials and their friends, where singles go to see and be seen, to the place parents bring their kids to play them while enjoying a frosty one, or three. There is no denying the old adage remains true in Charlotte, however: there truly is something for everyone.

When you’re in Charlotte and want to solidify your plans for a brewery crawl or sample the crème de la crème of beers, the options below are bar none the best around, and you’d be remiss to leave them off your itinerary. 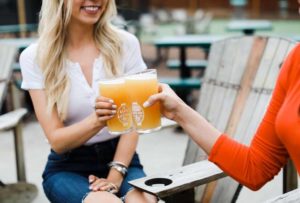 Multiple locations | Est. 2011
First dates, baby showers, and everything else in between happen at this Charlotte favorite. The beer’s great too.
NoDa Brewing is not only the second oldest and one of the most successful breweries in Charlotte, but it has also created some of the most award-winning beers in the city and beyond. At their larger taproom located in the North End, you can imbibe their award-winning Hop Drop ‘n Roll or try one of their Brizo brand spiked seltzers. Their “OG” location on North Davidson has reopened on a Friday through Sunday schedule and serves a selection of their sour beers.

We want to give some love to some places not mentioned above. We adore what the team at Suffolk Punch is creating with the amazing trifecta of a brewery, restaurant, and coffee shop. Their space is gorgeous (inside and out), and we’re excited for their future. Protagonist Clubhouse may be new to the Charlotte beer scene, but we have high hopes for this nano-brewery. When Southern Tier Brewing Company, Sixpoint Brewing Company, and Victory Brewing Company announced they were joining forces to bring Brewers at 4001 Yancey to the Queen City, there was much rejoicing. And although they’re new on the block, Town Brewing Co. has created a following in the FreeMoreWest area, while Sycamore Brewing continues to hold down the weekend and South End Rail Trail crowd. Much respect.

VIEW THE FULL ARTICLE AT THRILLIST.

Will this Charlotte restaurant’s fancy loo be named the best bathroom...