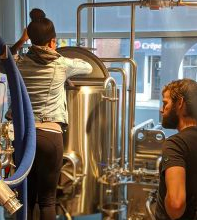 A new and timely craft beer effort is aiming to raise awareness of social injustices and to raise funds for police brutality reform as well as legal defenses for those who have been wronged. The “Black is Beautiful” campaign was created by Weathered Souls Brewing in San Antonio, TX. The campaign provides a platform that is about understanding and supporting people of color and aims to provide education and information in an effort to bring change.

Charlotte brewery Protagonist is proud to collaborate with Town Brewing to create the custom beer for the “Black is Beautiful” campaign. 100% of the beer’s proceeds will go to local organization, 100 Black Men of Charlotte, whose work supports success for the youth of our community through mentorship. The support of this movement aligns with Protagonist’s mission to give back to their community and their effort to show that the brewing community is an inclusive place for everyone.

This special Imperial Stout beer will be a decadent brew. It is being brewed now and should be available at Protagonist and Town taprooms in about 3 weeks.

EDITOR’S NOTE: The above is a press release from Protagonist Beer. Any opinions expressed therein are those of the brewery, and not those of BeerCharlotte.com.