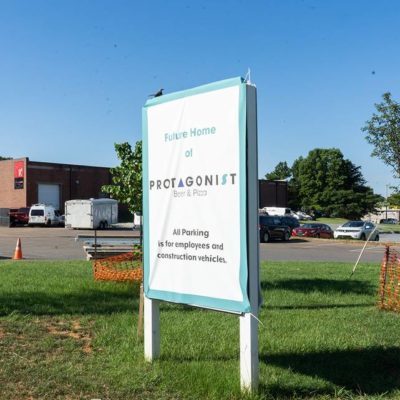 Despite this, the buildout has largely been unaffected by COVID-19 these last few months as they approach an October opening, with one exception: They’ve used some of the funds originally allocated to the new brewery to keep their existing employees on staff and to bring on another 30-40 employees for the new brewery.

“We’re just really happy and excited, especially during the current times, to be able to offer 30 to 40 jobs to people,” co-founder Mike Salzarulo said. “People have been hit really hard, especially in this industry.”

There will be plenty to do at Protagonist Lower South End, which sits at the corner of Southside Drive and Yancey Road in the space formerly home to The Broken Spoke (which recently announced plans to move to NoDa). Cluck Design Collaborative is the architect. The 15,000-square-foot space will include three separate bars, a 15-barrel brewhouse, a barrel-aging room, a mezzanine and a pizza kitchen turning out whole pies, as well as individual slices.

While the pizza menu is still in the works, expect seven to 10 different pizzas, as well as a build-your-own option, plus salads and appetizers. You can enjoy the food at the brewery, of course, but Protagonist plans to deliver as well.

Protagonist rotates through a number of different beer styles at its NoDa location, where co-founder and head brewer Jeremy Claeys brews on a small two-barrel system. Salzarulo could think of only two beers — Danks Obama and Chunk — that they have brewed three times. With a much larger brewhouse in LoSo, however, Claeys will be able to focus on building the brewery’s core beers.

“We don’t do a lot of repeat beers,” Salzarulo said. “What’s nice about the new location is that we’re going to start building our core brands. We’ll have some core beers that we’ll start to package and that we’ll have on our taps at all times.” The beer lineup will take shape in the months to come, but Salzarulo said it will feature a mix of the clean, traditional styles they are passionate about, as well as those that their consumers are asking for.

click here to read the original article via Charlotte Five