They say “it’s an honor just to be nominated,” and for a handful of restaurants — win or lose — they can take pride in the fact that they were one of just ten finalists in the annual America’s Best Restroom competition.

For 18 years, Cintas — a business services company that can assist with restroom supplies — has been paring down a list of nominated restrooms into ten finalists for Americans to vote on. This year’s list includes some heavy hitters. Two airports made the cut: LaGuardia Airport Terminal B and Sea-Tac Airport North Satellite Terminal. The Nashville Zoo is on the list thanks to its toilets with exhibit views. The Natick Mall in Natick, Massachusetts, was deemed worthy due to its chandelier and marble shelves. Portland, Oregon’s hip hotel Jupiter Next also got a nod, as did the restrooms at NYC’s New Museum of Contemporary Art.

That left four restaurants to find their way into finalist positions — creating a de facto list of some of the best restrooms in the restaurant world for 2019.

Cleveland’s Butcher and the Brewer brewpub is known for its “hand-built brews” and public house fare, but Cintas suggest that its restrooms are as unique as its atmosphere, thanks in part to a “green subway-tiled accent wall [that] pops against a white communal sink which is centered between private stalls.”

Jianna in Greenville, South Carolina, bills itself as “modern Italian & oyster bar,” but apparently the restrooms rival the homemade pastas. “Each of the four single-user washrooms embrace different visions that come to mind of Italian culture with distinctive personality and flair,” Cintas explains. “Picture an old-world town square with cobblestone streets and rustic charm, another that reflects Italy’s beautiful seacoast and the fresh salt air. While one transports you to sipping delicious local limoncello and finally the last conjures up images of racy red sports cars on winding hairpin roads. All materials including tile, wallcovering, accessories and lighting were specifically chosen to reflect the character of each space to transport the guest to their own Italian daydream.” 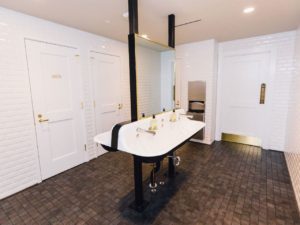 La Belle Helene is described by Cintas as “Charlotte’s most beautiful French brasserie,” but they didn’t make this list for their food. “La Belle Helene’s unisex restroom vanity offers a shared space for all guests to do more than just wash their hands,” Cintas states. “A hand-painted mural reflected in the vanity mirror offers a backdrop — for selfies, of course — and the space has been named Charlotte’s most beautiful bathroom time over time.”

Finally, Michelin gave San Francisco’s Mourad a star due to its fantastic Moroccan cuisine, but Cintas suggests the restroom is also “worth a stop!” “Designed by Olle Lundberg, the restrooms … capture Morocco and San Francisco in a space that celebrates old and new, tradition and innovation,” Cintas writes. “Each of the fully enclosed stalls is decorated in a different color of floor-to-ceiling Moroccan mosaic tile.”Are any of the ten your favorite? Voting is open from now until September 13 at www.bestrestroom.com. You can find photos of all the finalists there as well — giving you something to look at while you’re in your own bathroom.

VIEW THE ARTICLE AT YAHOO.
Johnny Fly Co in Studio