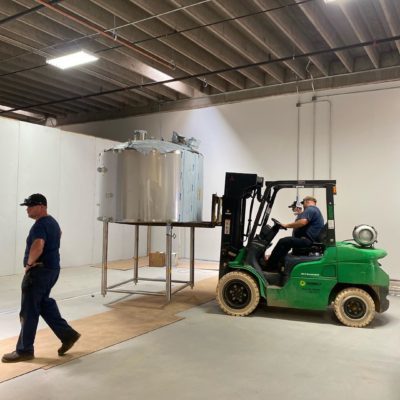 Protagonist
Protagonist Beer Co.’s nano-brewery in NoDa has been open a little more than a year, and already the team is planning location two and three. This fall, Protagonist will open its 21,000-square-foot brewery in Lower South End in the former Broken Spoke space.

The new brewery is 12 (!) times as big as Protagonist’s intimate taproom on North Davidson Street. It’ll be styled similarly to their first location, co-founders Ryan Owens and Mike Salzarulo say, with a crisp white color palatte and the same “We Make Beer” neon sign — plus an addition of a “We Make Pizza” to tie in Protagonist’s new pizza kitchen.

While it’s still at least a year or two away from opening, the team is also hoping to build a beer garden on property they purchased on Brevard Avenue near Optimist Hall.

“We always wanted to build something larger,” Salzarulo says. “We’re still relatively unknown in Charlotte’s beer scene. This is our chance to introduce ourselves again.”

Layout: The LoSo brewery consists of 15,000 square feet of indoor gathering space, plus 6,000 square feet of outdoor space. There are three separate bars — one in the main lounge area, one attached to the pizza kitchen, and one upstairs on the mezzanine.

Beer: Protagonist’s owners are longtime friends who found a passion for beer through home brewing. Before they opened their first location, they hired Jeremy Claeys (formerly of Wicked Weed) to lead brewing. At the LoSo brewery all beer on tap will be Protagonist’s own. The NoDa location, on the other hand, often has guest brews.

Bestsellers: This new location will have Protagonist’s bestsellers on tap, including Danks Obama, a West Coast-style IPA.

Full bar: In addition to beer, Protagonist will have cider, wine, cocktails on draft, and a full bar, which they’ll stock in part with liquors from the previous tenant, Broken Spoke. Broken Spoke is opening up a distillery in NoDa this year in the former Bold Missy spot.

Pizza: Protagonist will have a gas pizza oven and pizza available to purchase by pie or by the slice. The slices will be big, Owens and Salzarulo say. Expect Benny’s-sized slices that are bigger than your head. There will also be smaller personal pies.

Jobs: With so much extra space, Protagonist is also expanding its team from about five employees to as many as 50. Right now, they’re looking to hire a general manager.

Opening amid pandemic: Once it’s safe to do so, Protagonist in LoSo will be able to host events of more than 1,000 people. For now, Owens and Salzarulo say they’re just glad to have more space for social distancing, especially more outdoor space.