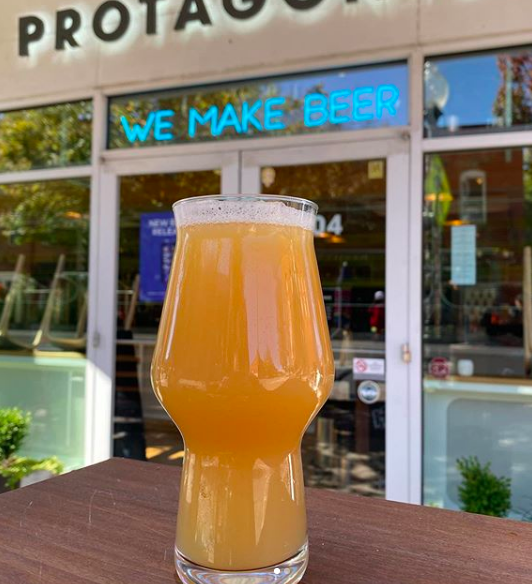 When Protagonist Beer Co. opened its taproom in NoDa earlier this year, the owners were already planning for a second location.

Although those plans have changed, a second location is indeed on its way — just not in Optimist Park as initially planned (at least, not yet). Instead, the founders behind Protagonist Beer Co. will move into the spaces currently occupied by sister businesses The Broken Spoke and Great Wagon Road Distilling Co. in Lower South End.

While moving through the design phase for the Optimist Park project, it became clear that the brewery’s plans wouldn’t allow for enough beer to supply that brewery as well as Protagonist Clubhouse, the small brewery and taproom in NoDa.

“We weren’t able to put enough brewing equipment in to meet our growth ability,” co-founder Mike Salzarulo says. “That’s why we started to search for another location. This location will also produce beer for whenever we do open the Optimist Park or Brevard location.”

The crew at Protagonist Beer Co. will take over the building’s lease next March. Because the space is already outfitted with many of the same utilities and drain lines that a brewery would require, the owners of Protagonist anticipate a quick build-out of four to five months, which could mean opening next summer.

Including the inside and outdoor space, the crew at Protagonist will have about 20,000 square feet to work with. Plans call for a full bar inside, as well as an indoor/outdoor bar that could allow patrons to pick up food or beer to-go at a walk-up window (which could be useful during special can or bottle releases).

“The main thing that we’re super-excited about is the outdoor patio area,” co-founder Ryan Owens adds. “I think it’s going to be a cool outdoor space where we can do live music, and it just opens itself up for a really cool outdoor experience.”

Protagonist has held several beer education events at the NoDa taproom, and it hopes to continue that at the new facility, which boasts much more space and parking.

“We’ve had so many ideas cued up for events at the taproom in NoDa, but we just don’t have the size or the parking to execute on those events,” Salzarulo says.

As for the beer, the Protagonist Clubhouse will continue to serve as an incubator of sorts, where head brewer Jeremy Claeys and crew can run through a variety of styles before deciding what to scale up at the new facility. The new location will feature a 15-barrel brewhouse, which will dwarf the two-barrel system at the current location.

In addition to being drawn to the building’s size, Protagonist’s founders also appreciated the chance to move into an area with no shortage of craft-based beverages. They count as neighbors The Olde Mecklenburg Brewery, Sugar Creek Brewing Co., Brewers at 4001 Yancey, Lower Left Brewing Co., GoodRoad Cider Works, Queen Park Social and Doc Porter’s Distillery.

“We also feel like we can slot into our own niche with American IPAs and classic styles, without a heavy influence one way or another,” Owens says.

And while the owners are still thinking through their vision when it comes to the specific beers to be brewed in the new space, they know there will be an emphasis on IPAs and a new lager program.

“Whether that’s a new-school lager that’s a little hoppier or a traditional style that we’re trying to recreate, we’re going to play with that a little bit,” Claeys says.

Plans also call for a barrel room, where Protagonist will focus on bourbon-barrel-aged beers, wild and sour ales, and beers brewed with Brettanomyces (a wild yeast). The brewery may even bring in a foeder or two for the first phase of the build-out.

And, given the building’s history, the founders hope that the barrel room will house a few beers aging in barrels from Great Wagon Road Distilling Co. Fans of that distillery will be happy to know it will move into a new facility of its own, though founder Oliver Mulligan hasn’t yet announced the location.

Once upon a time, Mulligan needed The Broken Spoke to operate as a separate entity to pour spirits from Great Wagon Road Distilling Co. But now, in the wake of a new law that took effect in September, Mulligan can finally serve samples and cocktails at the distillery itself. He’ll use this opportunity to move operations into one consolidated location, with a focus on the distillery itself.

Inspired by one of his favorite bars in Ireland, Mulligan also plans to serve whiskey directly from the barrel.