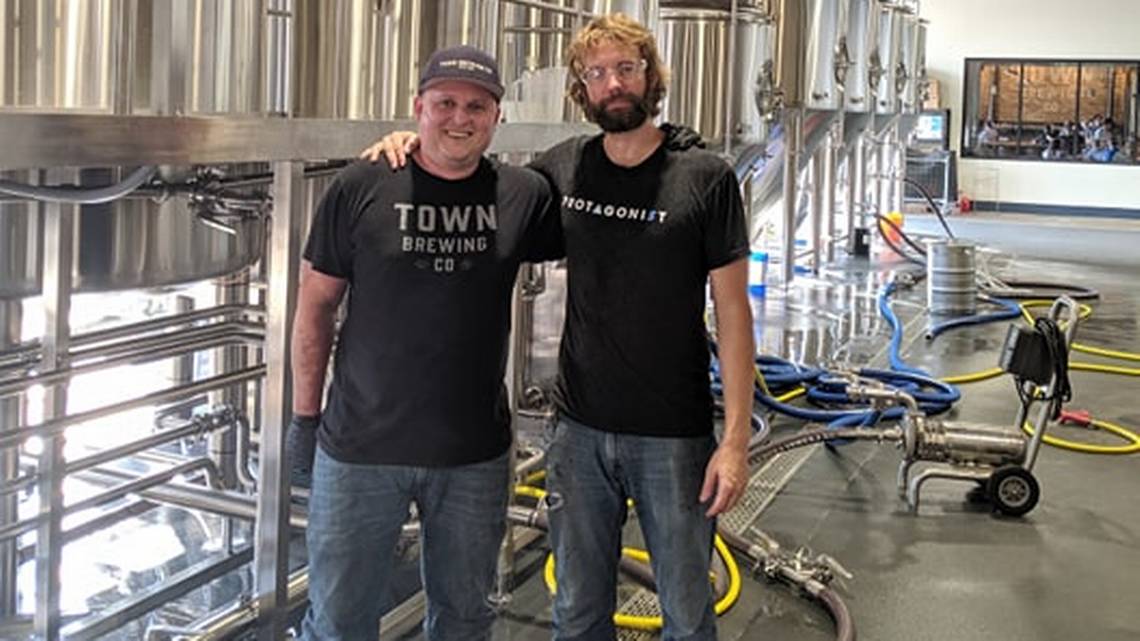 Can two local brewers make it through ‘dry January’ without a drop of their own drink?

Brian Quinn and Jeremy Claeys have shared many beers over the years, but that ends this month.

Well, at least for the next 20 days or so. Like many others, the two are taking part in “dry January,” a growing movement in which people give up alcohol for the first month of the year. But abstaining from alcohol might be harder for them than others, considering they are surrounded by beer day in and day out.

Quinn brews at Town Brewing Co., and Claeys at Protagonist Beer Co. Before they were brewers here in Charlotte, the two studied the trade together at Doemens Academy in Munich, Germany.

They have a friendly “gentleman’s wager” of $250 on the line. If they both lose, or if they both go the full month, neither has to pay anything. But if one slips and the other makes it all January, the loser must fork over the cash.

No strangers to competition, Quinn and Claeys also compete against one another in a local axe-throwing league. And for Claeys, that competitive aspect of it all provides even more motivation.

“I’m a competitive person,” he says, “so I figured if I could ring him into it I could probably better my chances.”

Claeys participated in a dry January about six years ago. This will be Quinn’s first attempt, though he’s considered cutting back in the past.

“It certainly helps to have that added wager to keep things honest,” Quinn says. “I was toying with the idea for a while. I know it’s something Jeremy and I talk about all that time is that, working in this industry, you can always find some excuse to go out and have a few beers, whether it’s at the taproom or at a sales event in the market.”

Because brewers and others in the industry are constantly around beer (and often free beer at that), it can be easy to overdo it, according to Quinn.

“We see a lot of people that just burn out in this industry,” he says. “It can certainly lack moderation at times, though if you’re trying to make a career out of it and fully go the distance you need to find some sort of balance.”

While several bartenders at Town Brewing Co. are also participating, not everyone in the beer community is on board.

“I’ve gotten a lot of eye-rolls from other industry people for doing it,” Quinn says.

They’re only about 10 days into the challenge, but so far that balance is paying off. Quinn is sleeping better, he says, and he jokes that his apartment has never been cleaner. While they both maintain that weight loss isn’t their primary goal, they did weigh in at the beginning of the month to chart their progress. Claeys is spending less time at the brewery, and more time exercising.

“It’s creating a new routine for myself,” Claeys says. “It’s okay to have beers, but to me life’s all about balance. I really think this is a good opportunity to start off the year right and get on a good schedule. The weight loss is part of it, but it’s also about getting that mental clarity heading into a fresh year.”

Health benefits aside, both brewers do acknowledge the irony of taking a break from the very product they count on others to purchase.

“As a business owner, you certainly don’t want people to stop drinking in January,” Quinn says.

That’s especially true at the start of the year, when many breweries experience a post-holiday slowdown as some start the year by cutting back on spending and calories.

They have agreed to allow each other very small tastes when actually required for sensory evaluation of beers, which usually involves smelling the beer and samples as small as an ounce or two.

“For me, sensory is a huge part of what I do for my job,” Claeys says. “Especially with seven beers coming out this month. I need to be able to sample, but in that very controlled, sensory environment.”

The two also used this an opportunity to sample some non-alcoholic beers, with Heineken 0.0 being the best of what they tried.

“We’ve actually been dabbling in the non-alcoholic beers a little, I think more out of professional curiosity,” Quinn says. “It scratches the itch a little bit.”

Outside of that, water, coffee and kombucha have been filling the void left by beer. But assuming they make it through the month, the two plan to celebrate by sampling widely at the Queen City Brewers Festival.