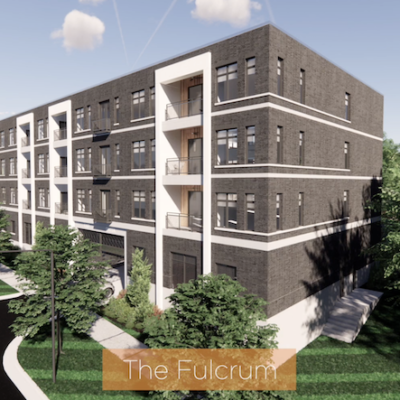 As you might know, just about all of the residential construction in South End in the last decade has been apartments — and lots of them. Now, a developer has announced plans for condos.

New real estate development company Fulcrum, headed by partners Shawn McAllister and Denise Abood, is planning 45 condos in a four-story building at 1900 S. Tryon St., at the intersection with Worthington Avenue. They are one- and two-bedroom units that will sell in the $300,000 to $400,000 range. The one-bedrooms are between 719 to 780 s.f., and two-bedrooms will be between 1,000 and 1,200 s.f.

Abood tells The Ledger the company thinks there’s a market to serve people who like the amenities of South End but who don’t want to move far away in order to own something. “Ownership is key,” she says. “Folks are spending $1,500 to $2,500 a month [in rent] flushing it down the toilet when they have an opportunity to have an investment. We know it’s the greatest purchase folks make in their lifetimes.”

After the housing crash of the late 2000s, with a lot of people wary of buying, developers largely stopped building condos near the center city, McAllister says.

Construction should start in the next three months, they say. The development will be “a controlled access-entry building with secured parking, amenity deck, green space and industrial chic mercantile styling.”

The development will be called The Fulcrum, with the units expected to be completed — or “delivered,” in developer lingo — in the fall of 2021.

click here to read the original article via Charlotte Ledger